(3) For the purposes of this Act, an
employee –

The Constitutional Court provided clarity in its judgment in Assign Services (Pty) Limited National Union of Metalworkers of South Africa and Others (CCT194/17) [2018] ZACC 22. It ruled in favour of the single employer approach in that an employee who earns below the statutory threshold (R205433.30 per annum), and does not provide “temporary services”, becomes the employee of the client for the purposes of the LRA (dismissal, unfair labour practices and organisational rights) after three months.

Despite the clarity obtained from the Constitutional Court, there has been different views held in practice regarding the interpretation of the Constitutional Court judgment. Therefore, for the purposes of providing final clarity, it is important that we consider the interpretation of the Commission for Conciliation, Mediation and Arbitration (“CCMA”) in so far as the aforementioned judgment is concerned.

In this case, it was clear that the TES employees (hereinafter referred to as “the applicant”) have been employed in the services of the client, Swissport, for a number of years. Furthermore, there was no evidence before the CCMA that the applicants performed a temporary service. As a result of this, and as highlighted above, the deeming provision in terms of section 198A(3) of the LRA was applicable. Consequently, the CCMA held that the applicants were deemed to be the employees of Swissport, and in terms of the Constitutional Court judgment, Swissport was deemed to be the employer for the purposes of the LRA. It followed that, in terms of section 198A(5) of the LRA, the applicants ought to be treated on the whole not less favourably than employees of the client performing the same or similar work, unless there is/was a justifiable reason for the different treatment.

The applicant who were employed as forklift drivers claimed that they were being treated less favourable than cargo controllers employed by Swissport who received additional benefits than forklift drivers. In evaluating the aforementioned positions, the CCMA held that despite there being an overlap in some of the duties of the forklift drivers and cargo controllers, the evidence which was tendered supported the conclusion that the two jobs were different in many aspects. The job of the cargo controller carried more responsibilities and additional tasks which the forklift drivers did not perform. The CCMA held that the two positions were not the same or sufficiently similar to warrant the conclusion that the applicants must be treated on the whole not less favourably than cargo controllers employed by the client. Furthermore, in respect of Nogenge (one of the applicants), an acceptance clerk, no comparator was placed before the Commission. It was established as common cause that Swissport does not employ any other acceptance clerks. A deemed employee must be treated on the whole no less favourably than an employee of the client performing the same or similar work. In the circumstances, as there were no comparators employed by the client, the applicant could not succeed in its claim.

Furthermore, the CCMA held that the deeming provision, as per paragraph 75 of Assign judgment, is a not a transfer to a new employment relationship, but rather a change in the statutory attribution of responsibility as employer within the same triangular employment relationship. The triangular relationship then continues for as long as the commercial contract between the TES and the client remains in force and requires the TES to remunerate the workers. This did not imply that the applicants must be “on the books” of Swissport. Swissport is required to take responsibility for the applicants in terms of the “deeming” provision of the LRA. This means that the applicant are deemed to be indefinitely employed by Swissport for the purposes of the LRA.

It is clear that the CCMA confirms our view in so far as the interpretation of the Constitutional Court judgment is concerned, mainly:

(1) The client becomes an employer for the purposes of the LRA;

(2) The TES may retain the role in the practicalities of the relationship (i.e. remunerating the employees);

(4) The TES may maintain a contractual relationship with the client; and

(5) The TES may participate in litigation where the employee seeks to pursue a claim founded on the TES’s joint and several liability.

Since the amendments in 2015, we have seen thousands of employees approaching the CCMA for an order to be transferred to the client post deeming. From the above award it is evident that the CCMA or a Bargaining Council cannot grant such relief to employees as the TES remains a party to the triangular relationship, even post deeming. It is also important to remember that the obligation to treat the deemed employees on the whole no less favourably only arises in respect of employees doing the same of similar work. It is not a blanket comparison of the terms and condition of the entire workforce of the client. 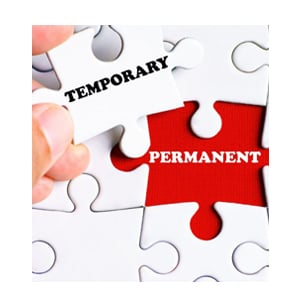