However, to be deemed an employee of the client and to be treated not less favourably, the employee is first required to establish that the initial employer is indeed a “temporary employment service” / “TES”.

In the abovementioned matter, the Labour Appeal court was tasked to determine whether Contracta-Force Corporate Solutions (Pty) Ltd. (“C-Force”) is a TES or an independent contractor.

Chep (“the Client”) and C-Force concluded an agreement in 2009 in relation to the conditioning of pallets which service was to be rendered by C-Force to the Client. It was not disputed that C-Force operated as a TES during this time.

In 2014, a service level agreement was entered into between the Client and C-Force. This was just before section 198(A) and its deeming provisions were promulgated into law.

The main difference between the 2009 agreement and the 2014 agreement was that C-Force was now expressly referred to as an “independent contractor” and there was a provision in the agreement stating that neither C-Force nor “any of its personnel would be deemed to be an agent, employee or partner of the Client”.

The Commissioner held that the true relationship between the Client and C-Force was actually one between a TES and a client.

The Client challenged the commissioner’s ruling on review before the Labour Court. The Labour Court agreed with the Client’s arguments and held that C-Force provided a product and not individual labour to the Client and that this fell outside the definition of a TES. It further held that the C-Force employees were not pursuing the Client’s business interests but rather that of pallet repair, which was the business of C-Force.

The arbitration award was accordingly set aside.

Section 198(1) of the LRA defines a TES as any person who for reward, procures for or provides to a client other persons who perform work for the client and who are remunerated by the TES. C-Force remunerated the appellant employees, and therefore what the court had to determine was whether C-Force, for reward procured or provided the appellant employees to perform work at the Client.

In summary, the court held that –

C-Force did not “deliver” repaired wooden pallets, but rather its employees, under the Client’s supervision, refurbished the pallets at the Client’s premises using raw materials and equipment supplied by the Client.

There is no reason in principle why the reward payment to a TES cannot be calculated by reference to tasks or product. The method for computing the reward payable by the client to the provider is not alone sufficient basis to exclude the provider from the TES category.

The substance of the arrangement between the Client and C-Force is more definitive than the form. The reward paid by the Client to C-Force was in substance driven primarily by the labour costs of refurbishing pallets.

Whether the employee “perform work for the client” entails an examination of the substance of the relationship between client and the workers. In this regard the commissioner was correct to consider the nature of the agreement with C-Force; the degree of control exercised by the Client over C-Force and the workers; and, the degree to which the workforce had been integrated into the Client’s workplace.

Although the SLA required C-Force to attend to the staffing and management of the plant and the workforce, other provisions of the SLA gave the Client an overriding oversight, supervisory and disciplinary authority.

Other key considerations include –

The Labour Appeal Court concluded that the appellant employees were provided to the Client by C-Force for reward to perform work for the Client. Hence, C-Force was a TES.

The judgment is helpful in setting out the factors to be taken into account and their application in assessing an alleged TES relationship.

Each functional outsourcing will have to be assessed on its specific facts, merits and within the framework developed by this judgment.

If a functional outsourcing entails elements such as the client exercising control over production and having overriding oversight, supervisory and disciplinary authority, factors which are indicative of a TES, then the relationship is rather one resembling a TES.

From a practical perspective, it seems that at least one practical way to circumvent such a finding on the stated facts is to interpose an intermediary company between the client and the TES (at least until the courts make a finding akin to ‘second generation’ labour broking).

For any advice in this regard, please do not hesitate to contact us. 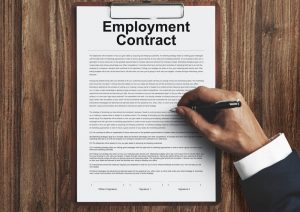