“a difference in terms and conditions of employment between employees of the same employer performing the same or substantially the same work or work of equal value that is directly or indirectly based on any one, or combination of the grounds listed in subsection(1)is unfair discrimination.”

The objective of this provision is to promote the implementation of equity in remuneration in the workplace.  It is aimed at driving and maximising the principle of equal pay/remuneration for work of equal value that employers’ practices in this respect are fair and free from unfair discrimination.

In practice, it is not unusual for new employees to be paid less than those with longer periods of service, even if they do the same work.  The question that arises is whether or not such differentiation in payment is in conflict with the principle of “equal pay for work of equal value” that was introduced by the aforementioned provision of the EEA.  This is one of the questions that was considered by the Labour Court (“LC”) in Pioneer Foods (Pty) Ltd v Workers Against Regression (WAR) & others (Case number: C 687/15, 19 April 2016).  This case was also the first appeal heard by the LC, in terms of the new section 10(8) of the EEA, against an award in an unfair discrimination dispute referred to the Commission for Conciliation Mediation and Arbitration (“CCMA”) by low-paid employees in terms of section 10(6)(aA).

The issue before the LC raised the interpretation of, and interaction between, section 6(4) and 10(8) of the EEA, as it related to disputes about equal pay for work of equal value and whether those claims must be founded on a listed or arbitrary ground of unfair discrimination.

The appeal was against an arbitration award in which commissioner Carlton Johnson of the CCMA upheld a claim of unfair discrimination brought by the Workers Against Regression (“WAR”) on behalf of its seven members.

In 2013 the Food & Allied Workers Union (“FAWU”) had negotiated a collective agreement with Pioneer Foods.  It was common cause that, in accordance with a collective agreement, Pioneer would pay newly appointed employees for the first two years of their employment at 80% of the rate paid to its longer serving employees.  The commissioner found that, by applying this to the seven members represented by WAR, Pioneer had unfairly discriminated against them in breach of section 6 of the EEA.  He ordered the payment of damages and the correction of the remuneration rate of employees concerned to 100% of the rate paid to the longer serving employees.

The union expressly informed the commissioner that it did not know the ground which substantiated its claim.  In other words, the union confirmed that the arbitration had run its course without revealing the unlisted arbitrary ground on which it relied.  In its subsequently produced heads of argument, the union for the first time asserted unambiguously that the unlisted ground relied upon “is the fact of their being newer employees, their having started to work for Pioneer later than their colleagues.”  The court found that it is not fair to the employer for an arbitration to run without the complainant union being required to, and then being held to, identify the unlisted arbitrary ground of discrimination being relied upon.  This would make it difficult or impossible for the employer to know what case it has to answer.  The Court held that the failure of the union to disclose the ground of unfair discrimination being relied upon would in itself have made the arbitration award reviewable and that there can be little doubt that it is also a valid ground of appeal.

In any event, the Court held that the award could not stand, because nothing in the EEA precludes an employer from adopting and applying a rule in terms of which newly appointed employees start at a lower rate than existing long-serving employees.  This applies whether or not the newly appointed employees had previous substantial experience, whether with the employer concerned or some other employer.  It also applies whether or not the employee had, in the past, rendered services to the employer concerned via a labour broker.Moreover, the Code of Good Practice expressly recognises “seniority or length of service” as a factor that can justify pay differentials.

On the facts of the case, the court held:

The LC found that the differentiation complained of was not irrational.  It was not based on an arbitrary unlisted ground and it was not unfair.  The commissioner ought to have dismissed the claim.  Consequently, the LC ordered that the commissioner’s award be reversed and substituted by an order dismissing the claim.  The appeal was upheld.

What can be adduced from the above decision is that differentiation in remuneration of people performing the same work on the basis of length of service does not automatically amount to arbitrary or unfair discrimination.  The circumstances leading to the differentiation must be considered. 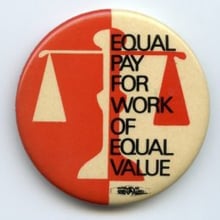