Derivative misconduct in a strike context analysed by the Constitutional Court

In the matter between NUMSA obo Khanyile Nganezi and Others V Dunlop Mixing and Technical Services (Pty) Ltd and Others, the Constitutional Court analysed the origin, development and application of the concept of derivative misconduct. The Court held that it would be wrong to rely on a duty to disclose as a valid and fair reason to dismiss employees rather than proving actual individual participation in strike related violence.

On 22 August 2012, employees of Dunlop embarked on a protected strike and on 26 September 2012, Dunlop dismissed them all.

On the first day of the strike, violence erupted and although an interdict was obtained, the violence continued and escalated over the following month. Dunlop’s dismissal of the employees was based on their alleged misconduct during the strike, some as culprits of violence and others on the basis of derivative misconduct. NUMSA challenged the fairness of the dismissal and the matter proceeded to arbitration.

Arguments by the parties

Dunlop supported the Labour Appeal Court majority’s finding that inferential reasoning would have led the arbitrator to finding that the third category of employees were also present at some
or all instances where violence occurred. With that established, the duty of good faith underlying the employment relationship necessitated the disclosure of other, or personal exoneration, neither of which was forthcoming. These failures were sufficient to prove derivative misconduct.

NUMSA disputed the correctness of the Labour Appeal Court’s findings on inferences drawn from the circumstantial evidence. Even if an inference of presence at the scenes of violence could be drawn, no derivative misconduct was established. Dunlop’s reciprocal duty of good faith required that the employee’s safety should have been guaranteed before expecting them to come forward and disclose information or exonerate themselves.

The Casual Workers Advice Office argued that there can be no derivative misconduct in the form of a duty by employees to disclose information about the conduct of their co-employees in the
context of strike action. This kind of duty could only flow from a fiduciary relationship, not merely from reciprocal good faith obligations in employment relationships. Furthermore, in the context of strikes, a duty to disclose would undermine a fundamental underlying feature of the history of collective bargaining, that of solidarity between workers. No duty to disclose exist in that context and there can be no form of derivative misconduct based on it.

Summary of the Court’s Findings

To expect an employee to unilaterally disclose information to the employer about the participation of a fellow employee in misconduct in a protected strike would be similar to imposing a fiduciary duty on the employee.

This expectation to disclose, in a strike context, would undermine the collective bargaining power of employees by requiring them to act in the interest of the employer without any associated obligation on the part of the employer to give reciprocally similar to the employees in the form of guarantees for their safety and protection before, when and after the required disclosure.

In respect of violent strikes, a balancing act is required between the perspectives of the employer and the employees. From an employer’s perspective, the impact of violence on the employer and their trust of the employee after the strike point to the rationale for derivative misconduct. However, from an employee’s perspective, the intimidation of innocent, non-striking or non-picketing workers made safe disclosure a prerequisite for even entertaining the possibility of derivative misconduct, due to the reciprocity of good faith.

To find the right balance, the court found that the reciprocal duty of good faith should not, as a matter of law, be taken to imply the obligation of a unilateral fiduciary duty of disclosure on employees. In determining whether a unilateral fiduciary duty to disclose information on the misconduct of fellow employees forms part of the contractual employment relationship, caution must be taken not to use derivative misconduct as a means to an easier dismissal rather than initially investigating the participation of individual employees in the primary misconduct.

It would be sufficient to establish complicity in the misconduct, if an employer can prove through direct or circumstantial evidence that individual employees in some form associated themselves with the violence before it commenced. Presence at the scene will not necessarily be required. Even prior knowledge of the violence and the necessary intention to association with the misconduct will be sufficient.

Dunlop failed to guarantee the safety of its employees when it expected them to come forward and disclose information or exonerate themselves,and for this reason the appeal must succeed.

Furthermore, with regards to the Labour Appeal Court’s finding that the arbitrator failed to consider circumstantial evidence and inferential reasoning, the chain of inferential reasoning before an employee may be found guilty is a long one. As the Court found at para 79, it must be the more probable inference that each of the employees was (a) present at an instance during the strike where the violence was committed; (b) would have been able to identify those who committed the violent acts; (c) would have known that Dunlop needed that information from them; (d) with possession of that knowledge, failed to disclose the information to Dunlop; and (e) did not disclose the information because they knew they were guilty and not for any other innocent reason.

The court found that on the facts, the more probable inference was that only some of the Applicants were present when violence occurred. This finding is not good enough as one still does not know who these employees are and to dismiss all in the absence of individual identification would not be justified. Therefore the inferential reasoning fails at the first step.

It is clear from this judgement that in the context of violent strikes, employers cannot expect employees to unilaterally disclose their knowledge of fellow employees’ guilt in the primary misconduct as the employer has a reciprocal duty of good faith to at least guarantee the safety of the employees.

Even in the event that an employer cannot pursue all avenues of establishing guilt in respect of the primary misconduct, they can still rely on derivative misconduct only if satisfactory guarantees has be given to employees required to speak up. Furthermore, evidence that employees in some way associated themselves with the violence, even by way of having knowledge thereof, either before or after it commenced, may be sufficient to establish complicity in the misconduct. 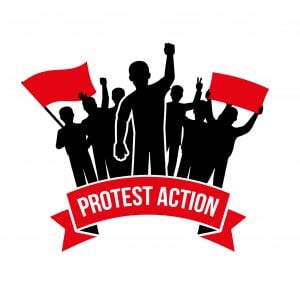